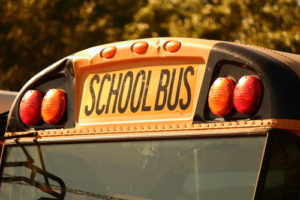 Residents of New Jersey are devastated to learn about a recent bus accident that left at least 20 people seeking treatment for their injuries.

On July 16, five school buses were traveling together carrying dozens of children from a summer camp when they unexpectedly collided. While investigators have not yet elaborated on the bus accident, it’s likely the buses collided with each other. Footage obtained from an ABC 6 helicopter revealed several of the buses with visible damage to the front and back ends. Eventually, four of the buses can be seen being towed from the scene.

Frightened students were examined by emergency medical staff at the scene of the crash. 67 of the students and ten adult staff members were cleared to return home while 24 individuals were instead transported to Virtua Voorhees and Virtua Mount Holly Hospitals with minor injuries. Among the injured are twenty students, two bus drivers and one summer camp staff member. Parents were reunited with their children back at the summer camp, and the summer camp promptly issued a statement thanking emergency personnel for their assistance.

Police are working hard to determine what caused the buses to collide, and their findings will play a major role in determining whether the injured victims will be able to pursue compensation from the responsible party. An experienced car accident attorney can help injured families expedite the investigation and fight for a prompt financial compensation for all losses associated with the accident. CourtLaw’s team of personal injury attorneys are prepared to answer any questions or concerns you have regarding your legal options. We can be reached through our online messaging service.

The articles on this blog are for informative purposes only and are no substitute for legal advice or an attorney-client relationship. If you are seeking legal advice, please contact our law firm directly.