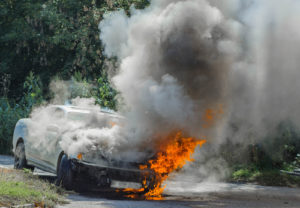 On route 80 westbound in Rockaway, NJ earlier in the month of July, a fiery accident took place leaving one man dead.

A man was standing on the side of the road adjusting the bikes attached to his car. As he was fixing the bike, another car came flying down the road after having lost control. The vehicle swerved off the road and went into the air before it spun and hit the guardrail where the man who was fixing his bike was struck and killed. Within seconds, the car parked on the shoulder of the road was in flames, while the other car that had been out of control started to flame up under the hood upon impact.

Luckily, a former police officer was driving about 100 yards behind and watched the entire incident unfold. He rushed over to the second car that was about to be set ablaze and pulled the driver and the passenger out of the car before the car was completely engulfed.

Though it is not known if there were any drugs or alcohol involved in the crash, it is suspected that the driver was completely free of any type of intoxicants. The ex-police officer was luckily in the right place at the right time and was able to save the lives of the two people who hit the man fixing his bike. Had it not been for him, the dead body count likely would have been three.

As fortunate as it is that at least two people made it out alive, the fact of the matter is that one man was killed as a direct result of another person. Car accidents like this are terrible, but on occasion, people are left dead due to another’s reckless driving.

If you or a loved one have been seriously injured/killed in a bad car accident, consider contacting attorney Karim Arzadi at CourtLaw. Our law offices understand the pain and suffering you are going through and understand that no amount of money can make up for a lost life. That being said, we will do everything we can to get you the maximum amount of compensation possible. Contact our offices today for a consultation.